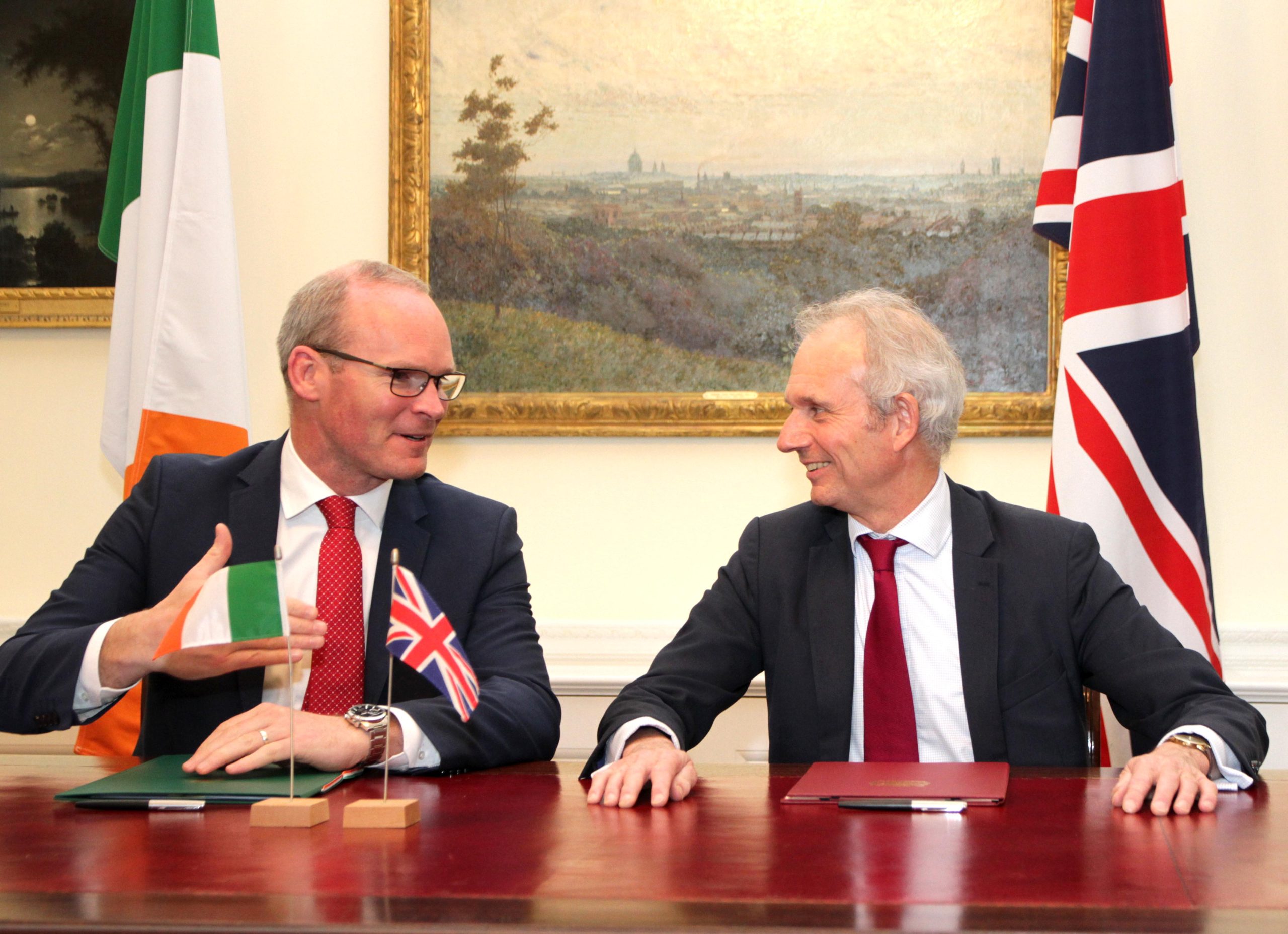 The Tánaiste and Minister for Foreign Affairs and Trade, Simon Coveney T.D., has today signed a Memorandum of Understanding (MOU) on the Common Travel (CTA) on behalf of the Government of Ireland, with the UK Government.

The Tánaiste and the Chancellor of the Duchy of Lancaster David Lidington MP signed the MOU in London before a meeting of the British-Irish Intergovernmental Conference.

Speaking in London, the Tánaiste said:

“Today marks an important moment for the long-standing Common Travel Area arrangement between our two countries.

“The CTA has provided rights and privileges to Irish and British citizens for nearly a century. However, it has not before been formalised in this way.

Many of us have personal experience of the CTA in our daily lives. This MOU demonstrates and confirms the commitment of both Governments to maintaining the CTA in all circumstances. It provides clarity and assurance for citizens of both countries that the way in which British and Irish citizens can live and work freely across these islands will not change.

The Tánaiste also had a message for British citizens living in, or with close personal ties to Ireland:

“The CTA is a practical demonstration of the enduring strength of the British-Irish relationship and of our people to people ties. I want to assure British citizens living in Ireland that they are welcome and truly valued here, as is their contribution to Ireland and Irish life. British citizens will continue to be able to travel freely, live, study, and work in Ireland into the future. I welcome the similar commitment and welcome of the UK Government for Irish citizens in Britain.

“Today Minister Lidington and I will also chair the British Irish Intergovernmental Conference. The CTA arrangements also underpin the Good Friday Agreement in all its parts, as well as the cross-border freedoms central to the lives and livelihoods of the people of Northern Ireland and the border region.”

Through the CTA arrangements, Ireland and the UK cooperate closely on immigration matters. Irish and British citizens are not required to take any action to protect their status and associated rights under the CTA.

Speaking in London where he is also attending the British-Irish Intergovernmental Conference, the Minister for Justice and Equality, Charles Flanagan T.D. said that:

“The Common Travel Area, where citizens of Britain and Ireland have enjoyed free movement in each other’s countries since 1922, is highly valued on all sides. The formalisation of arrangements today, a process which started in my Department, demonstrates our ongoing commitment to working together to foster greater reconciliation, shared understanding and partnership”.

Further details of the Memorandum of Understanding and Common Travel Area will be available here.

· The Common Travel Area (CTA) is a reciprocal arrangement between Ireland and the UK, the Isle of Man and the Channel Islands. It allows British and Irish citizens to travel freely between the UK and Ireland and reside in either jurisdiction. It also facilitates the enjoyment of associated rights and privileges for Irish citizens in the UK and British citizens in Ireland including the right to reside, to work, to study and to access social security benefits and health services, and to vote in local and national parliamentary elections.

· The CTA pre-dates our membership of European Union and will continue after the UK leaves the EU. The CTA is underpinned by deep-rooted, historical ties, and maintaining it has been and continues to be a firm commitment of both the Irish and UK Governments. The CTA has also been recognised in the negotiations on the UK’s withdrawal from the EU and there is agreement in the EU-UK Withdrawal Agreement that the UK and Ireland may continue to make arrangements to maintain the CTA while fully respecting the rights of natural persons conferred by Union law. Ireland will continue to meet all obligations under EU law in any circumstance.

· The new Memorandum of Understanding is the culmination of over two years work and codifies the shared principles and common understanding between Ireland and the UK of what the CTA entails and covers. This reaffirms the existing CTA arrangements between Ireland the UK and recognises the shared commitment of both to protect the associated reciprocal rights and privileges. The CTA is of vital importance to both Irish and British citizens. It is an enabler of the cross-border freedoms central to the lives and livelihoods of the people of Northern Ireland and the border region. The CTA is also of great benefit to Irish and British citizens, who will continue to enjoy associated rights and freedom of movement to each other’s countries no matter the outcome of Brexit, and is a key example of continued positive British-Irish engagement and cooperation.

· Cooperation between Ireland and the UK on immigration matters relating to the Common Travel Area is conducted through long-stranding structures which will continue.

· Ireland and the United Kingdom have agreed that all existing arrangements regarding Social Security entitlements will be maintained in Ireland and the UK. This means that Irish citizens living in Ireland maintain the right to benefit from Social Insurance contributions made when working in the UK and to access Social Insurance payments if living in the UK and vice versa. Existing reciprocal arrangements for other payments, such as child benefit, and pensions will also be maintained.

· All citizens, no matter their age, have access to all levels of education and training in either jurisdiction. This includes the EU level of fees and SUSI grants for UK citizens attending Irish Higher Education Institutions (HEIs), along with SUSI grants for Irish students attending UK HEIS.